Roughly 5 million Americans move from one state to another annually and some states are clearly making out better than others. Florida and South Carolina enjoyed the top economic gains, while Connecticut, New York and New Jersey faced some of the biggest financial drains, according to a Bloomberg analysis of state-to-state moves based on data from the Internal Revenue Service and the U.S. Census Bureau. 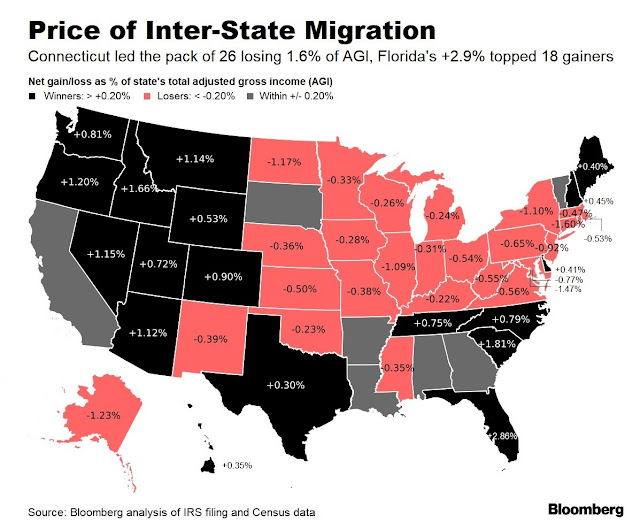 Connecticut lost the equivalent of 1.6% of its annual adjusted gross income, as the people who moved out of the Constitution State had an average income of $122,000, which was 26% higher than those migrating in. Moreover, “leavers” outnumbered “stayers” by a five-to-four margin.


Bloomberg’s analysis included all 50 states and the nation’s capital to provide a fuller picture of aggregate income flows from migration. About 10% of the population moves annually, or about 35 million people, according to the Census Bureau. Most moves are within the same county.


Florida posted a net income influx of nearly 3% of the state’s adjusted gross income in 2016. South Carolina, Idaho and Oregon were also among the largest gainers in the interstate shuffle. 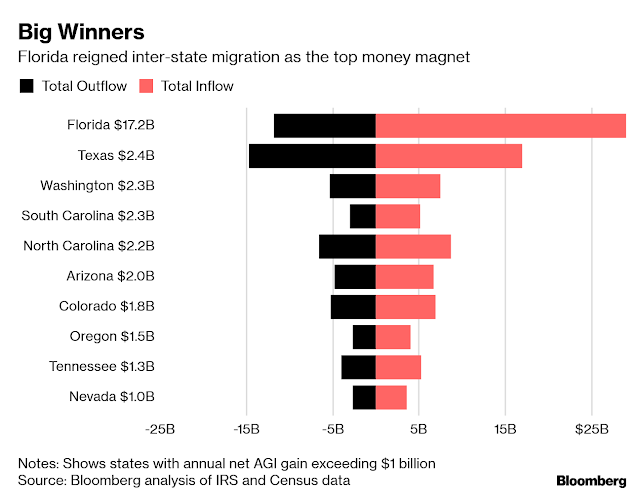 “Florida’s powerhouse economy continues to churn out new jobs, retiree migration to Florida is on the rise, and millennials are coming into their prime home-buying years,” Brad O’Connor, chief economist for Florida Realtor, said in a report before the trade association’s annual summit.

New York’s annual net loss was the highest, with a net $8.4 billion leaving the state. Exiting incomes of $19.1 billion were replaced by people who brought in $10.7 billion less in income. Illinois and New Jersey were next with net outflows of $4.8 billion and $3.4 billion, respectively.

Those three states also had three of the four highest proportions of outbound versus inbound residents last year, according to the United Van Lines, the largest U.S. household goods mover.

Florida was the top financial magnet, reeling in $17.2 billion more than it lost, about seven times the amounts netted by each of the runner-ups Texas, Washington and South Carolina. The Sunshine State was the No. 1 recipient of the wealth exodus from 18 individual states — with New York, Illinois and New Jersey combining to contribute about $8 billion to Florida’s income base.

While long a haven for retirement, Florida’s effort to lure Wall Street executives has gained traction thanks to a provision in the federal tax law passed by the Trump administration that hits residents of high-tax states by putting a lower cap on state and local tax deductions.

Florida is also one of seven states that collect no income tax. The others are Alaska, Nevada, South Dakota, Texas, Washington and Wyoming. While New Hampshire and Tennessee don’t have a state income tax, they do collect taxes on dividends and income from investments.

Having surpassed New York’s population in 2014 to be the third largest in the nation, Florida continues to siphon off the wealthy.

The average gross incomes of people moving to Florida from 10 states and Washington, D.C. exceeded $100,000, with those from Connecticut averaging $253,000. That far outstripped those of Florida natives who migrated to the reciprocal states.

“Job growth, lower costs of living, state budgetary challenges and more temperate climates” are the driving factors behind migration, Michael Stoll, a professor at the University of California at Los Angeles, said in separate study by United Van Lines.

Business formation can benefit from positive migration, too. Many of the states with the biggest income inflows from migration also lead in new business creation including South Carolina, Florida and Tennessee.

Home Buyer Demand will be Strong for Years to Come

There has been a lot written about Millennials and their preference to live in city centers above their favorite pizza place. Some have even gone so far as to say that Millennials are a “Renter-Generation.”


And while this might be true for some Millennials, more and more research has surfaced that shows for the vast majority, owning a home is a major part of their American Dream! 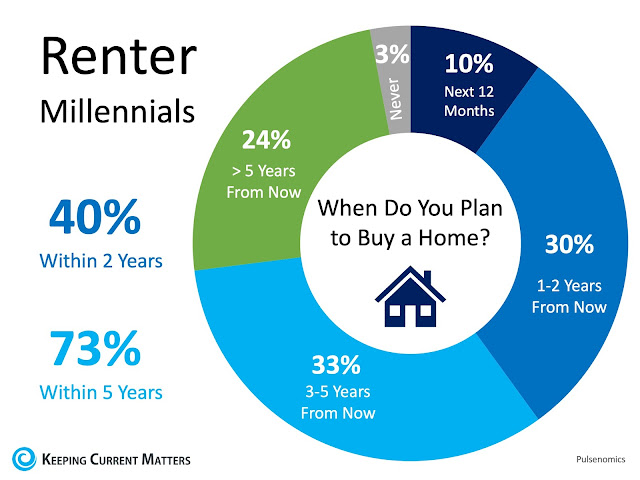 New research shows that 66% of Millennials who currently rent are determined to buy a home! Seventy-three percent of those surveyed by Pulsenomics plan to buy a home in the next five years, with 40% planning to do so within the next two years!

“Millennials want to own a home as much as prior generations,” Ali Wolf, Director of Economic Research at Meyers Research says. “We saw millennial shoppers scooping up homes in 2018—and 2019 will be no different.”


Bottom LineAre you one of the millions of renters who are ready and willing to buy a home? Meet with a local real estate professional who can help determine your ability to buy now! 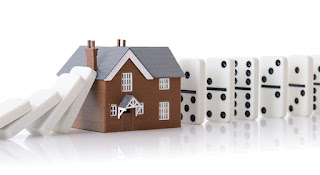 The percentage of home price appreciation on a year-over-year basis has decreased each month for over a year. The question was how far annual appreciation would fall. It seems we may now have the answer.

In a recent post on the National Association of Realtors’ Economists’ Outlook Blog, it was revealed that Realtors are starting to sense that home values are beginning to stabilize and that we may see appreciation beginning to accelerate again:

“About 3,000 REALTORS® who responded to NAR’s February 2019 REALTORS Confidence Index Survey had more optimistic— although modest— home price growth expectations over the next 12 months. Respondents expect home prices to typically increase by 1.9 percent nationally, up from 1.4 percent in the January survey.”

CoreLogic Home Price Index – The analysts at CoreLogic increased their projection for home appreciation for the next twelve months to 4.7% as compared to the 4.6% they projected in their previous report.

The Home Price Expectation Survey – In the 2019 first quarter survey, the nationwide panel of over one hundred economists, real estate experts, and investment & market strategists increased their projection for home value growth in 2019 to 4.3% compared to the 3.8% increase they had projected in the fourth quarter of 2018.

Bottom Line
Agents working the business every day, one of the premier data companies in the real estate space, and one hundred housing experts all agree: home price appreciation has ended its decline and looks to be stabilizing… and may even accelerate.

Why An Economic Slowdown Will NOT Crush Real Estate This Time


Many of us, particularly the Millennials and, to a lesser extent, the younger range of GenXer's, relate recessions with a home ownership catastrophe. Actually, the Great Recession was a rare event in the historical relationship between the two. History can be instructive-if you know it. Having been knee-deep in the real estate world through all the recessions noted below  I can vouch for the reality of the analysis and conclusion. Home ownership remains a steady and reliable wealth builder throughout time.  -- Brian 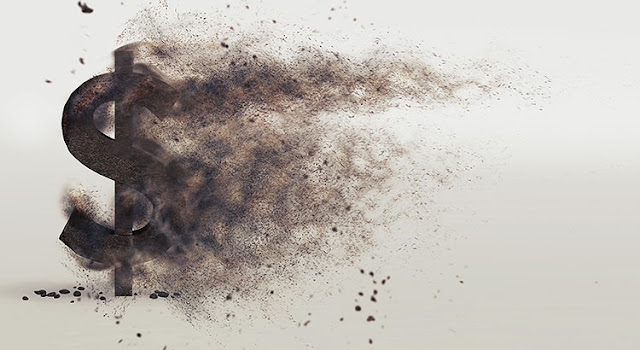 Last week, the National Association for Business Economics released their February 2019 Economic Policy Survey. The survey revealed that a majority of the panel believe an economic slowdown is in the near future:


Their findings coincide with three previous surveys calling for a slowdown sometime in the next two years:


That raises the question: Will the real estate market be impacted like it was during the last recession?

A recession does not equal a housing crisis. According to the dictionary definition, a recession is:

“A period of temporary economic decline during which trade and industrial activity are reduced, generally identified by a fall in GDP in two successive quarters.”


During the last recession, prices fell dramatically because the housing collapse caused the recession. However, if we look at the previous four recessions, we can see that home values weren’t negatively impacted:

“There’s no reason to panic right now, even if we may be headed for a recession. We’re seeing a cooling of the housing market, but nothing that indicates a crash.”


The housing market is just “normalizing”. Inventory is starting to increase and home prices are finally stabilizing. This is a good thing for both buyers and sellers as we move forward.

Bottom LineIf there is an economic slowdown in our near future, there is no need for fear to set in. As renowned financial analyst, Morgan Housel, recently tweeted:

“An interesting thing is the widespread assumption that the next recession will be as bad as 2008. Natural to think that way, but, statistically, highly unlikely. Could be over before you realized it began.”

Posted by Useppa Lifestyle at 12:12 PM No comments:

High on a ridge and boasting a 270-degree view of blue sky and sparkling water, spanning east to west for both sunrise and sunset. Beautifully landscaped, with a fountain at the front entry, this home literally sparkles in the sun. Stunning interior and over 4,000 SF on three levels with multiple terraces and a water view from every room. Perfect for boaters, the industrial strength dock has a 24,000-pound lift in a slip that can accommodate up to a 50-foot watercraft. 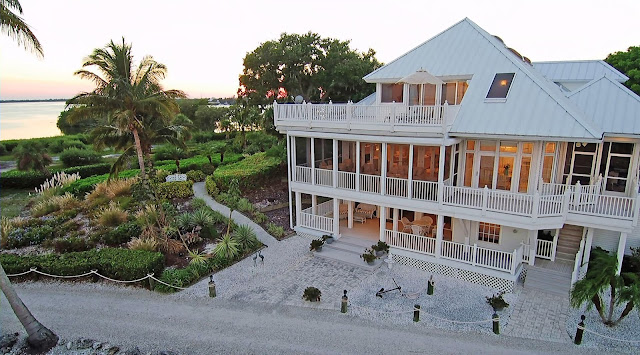 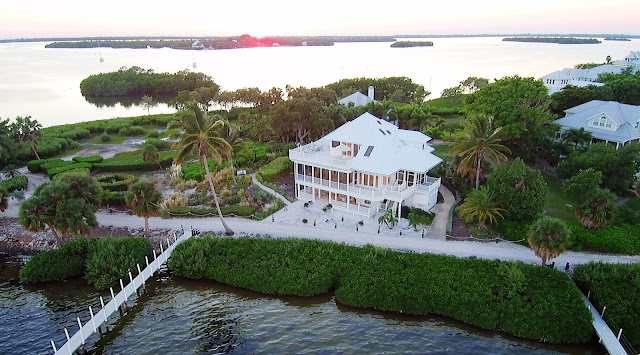 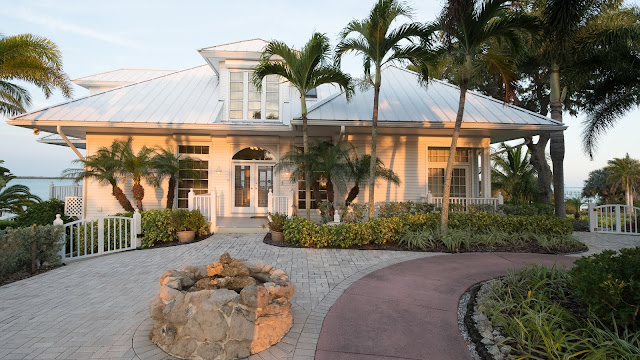 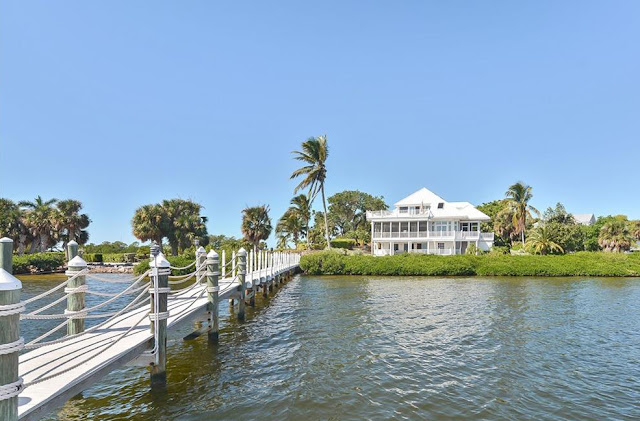 Posted by Useppa Lifestyle at 11:42 AM No comments:

This special Marina Villa overlooks the Useppa Marina and Pine Island Sound. Situated on one of the higher elevations, this home is central to the social and boating life of the community. Rebuilt frame-out after 2005, this 3-story, 3-bedroom, 3.5-bath home features quality finishes throughout over 1,800 SF.  Keep your vessel in a private slip with a 10000 lb lift. 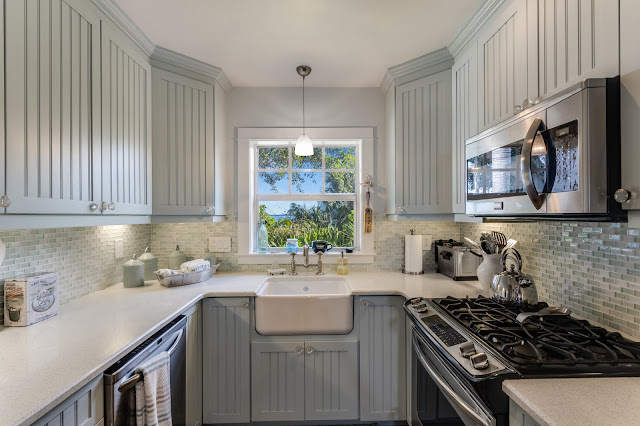 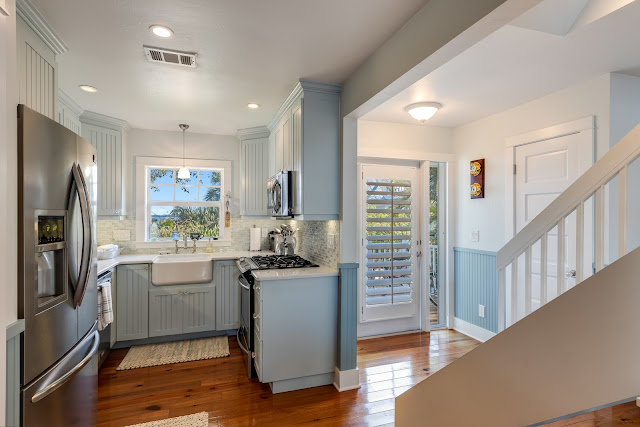 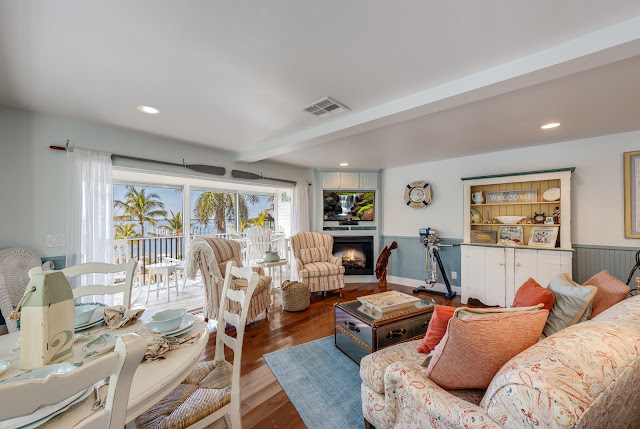 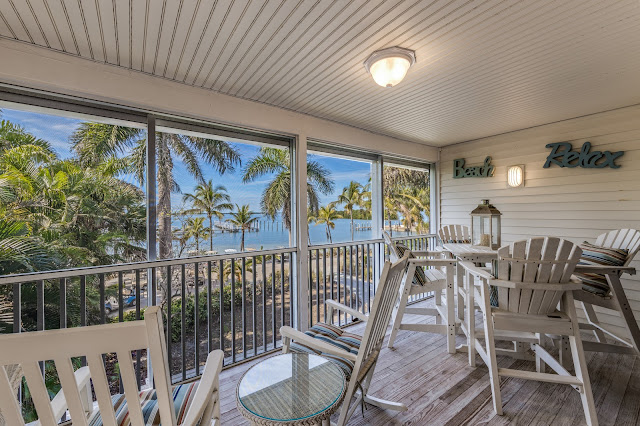 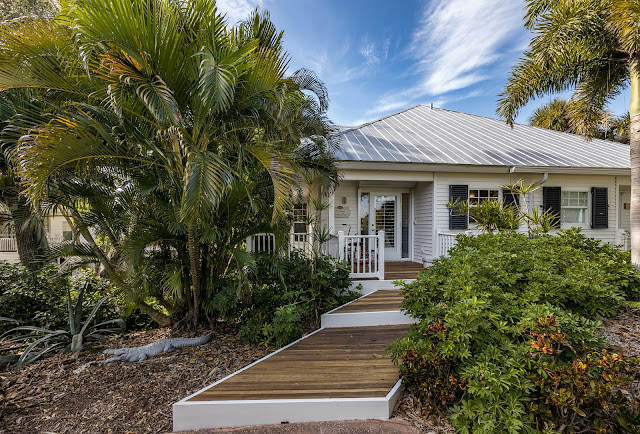 Posted by Useppa Lifestyle at 2:02 PM No comments:

Just in time for all to enjoy, beautifully resurfaced Pool Deck and Patio at the Collier Inn, along with a casual bar for lounging on the dock. 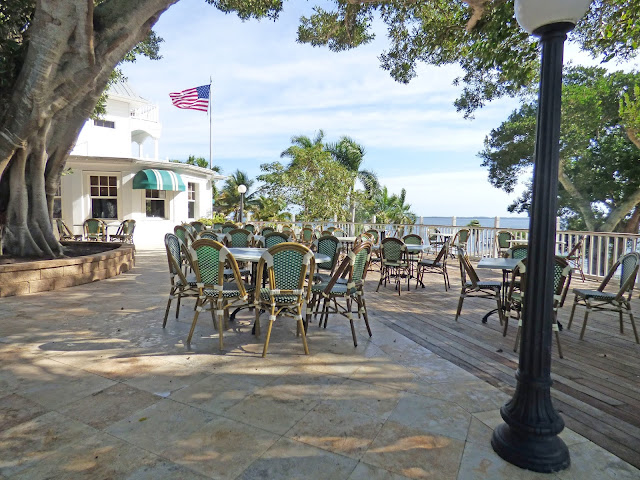 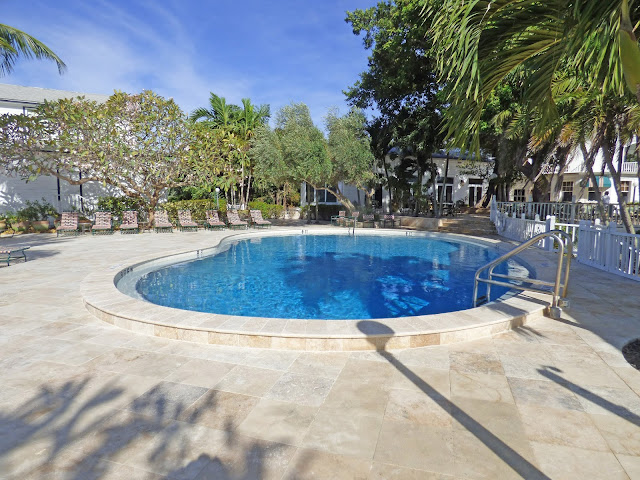 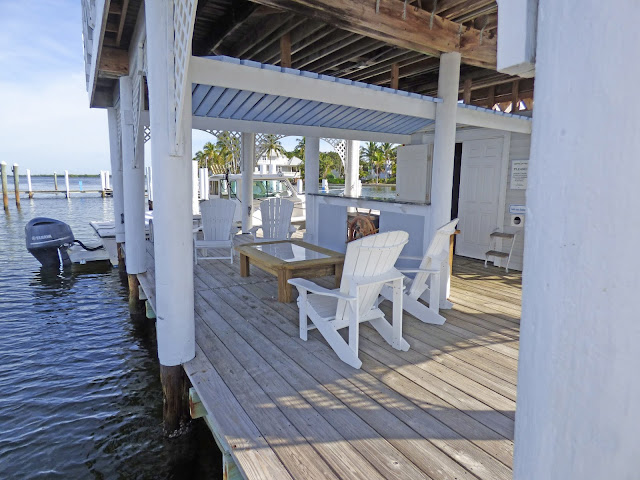 And, in case you were wondering...the Weather is Fantastic! 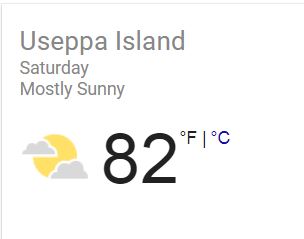 Posted by Useppa Lifestyle at 7:05 PM No comments:

Loving the Island Life on Useppa!